Industrial washing machine and dryer are here to help!

Industrial washing machine and dryer are wonderful machines which help us save a lot of time, energy and even resources. Their function is, as the name suggests, to wash laundry (or equipment), and were designed to alleviate manual effort, required for this task. Furthermore, the industrial washing machines and dryers were developed for another important reason – by hand it’s nearly impossible to achieve the level of cleanliness and disinfection, required in some industries, while such demands are easily met with the usage of hygiene equipment, e. g. industrial washing machines and dryers. Prices of such devices have in the past years become reasonable enough, so that most industries can afford them without problems, especially if they have the benefits that they’ll gain in mind.

Time before the invention of (industrial) washing machine and dryer

Before the invention of (industrial) the washer machine doing the laundry had to be done by hand. Even for household purposes it was a demanding process, so it’s not difficult to imagine, how challenging it must have been for the early industries. Washing by hand included soaking, beating, scrubbing and rinsing textiles, and prior to plumbing and electricity the water had to be carried from the well/river and then boiled and poured in a tub. Rinsing was followed by wringing – the soaking wet clothing would be formed into a roll and twisted by hand to extract water, then they were hung and dried in the air and later ironed by hand. The entire process often represented an entire day of really demanding work, therefore it seems almost needless to say, that the invention of (industrial) the washing machine and dryer really meant a relive and the automated process enabled a more efficient use of time. 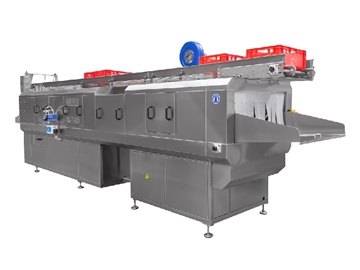 The history of (industrial) washer machine

The early washers (not industrial machines yet) were not completely automated, of course, but have still facilitated the hard work. The first English patent was issued in 1691. In 1752 another early washing machine was published in a magazine and another in 1767. Two more patents were issued in 1782 and 1790. The first (not yet industrial) washer machine included an enclosed container or basins with grooves, fingers or paddles, which helped with scrubbing of the clothes. The person would use a stick for pressing and rotating clothes, which were rubbed against the container. Even though hand powered, it was still quicker and more effective that rubbing clothes by hand.

The next step towards an (industrial) washer machine was an invention of a rotating drum, which was moved/rotated by hand. Eventually wooden drums were replaced by metal ones, which could also be placed above an open fire, so that the temperature of the water was raised, which made removing dirt more effective.

The invention of steam engine in 19. Century benefited the development of (industrial) washer machine as well. In 1862 Richard Lansdale of Pendleton patented rotary washing machine. In America it’s difficult to ascribe the invention of (later industrial) washing machine and dryer to one person, since there are several people, who patented their own devices. Among other noticeable names are Nathaniel Briggs (1797, New Hampshire), Amos Larcom (1829, Watervlier, New York), John E. Turnbull (1843, Saint John, New Brunswick), who was the first one, who combined the washing machine with a wringer mechanism, Nicholas Bennett (in 1850s, New Lebanon, New York) invented a “washing mill” – however he assigned the patent to David Parker later. The merit for the invention of Triumph Rotary Washer goes to Margaret Colvin (1876, Philadelphia).

Modern (industrial) washing machine and dryer would not be possible without electricity and they started appearing after 1904. The first inventor of an electric washing machine is unknown, but the credit was later (incorrectly) ascribed to Alva J. Fisher.

The design of home and later industrial washer machine was improved in 1930s and by 1940 over half of households with electricity owned this practical device.

The (industrial) washing machine and dryer of today

Modern large industrial washing machine would not be possible without these first attempts and basic models, however since then we’ve made a really huge leap forwards. Today’s devices are big and extremely efficient, they can wash huge quantity of textiles in short time. Niero’s industrial washing machines and dryers, for example, guarantee optimal hygiene in a variety of businesses, are user-friendly, energy efficient and have low operating costs. They are not only associated with textiles, our washers can also be specialized for cleaning trays, moulds, boxes, racks, pallets, baskets, bins and other objects.

For more information on what our equipment can do, please contact our professional team, which will present you all the standard options as well as possible customized solutions.