The world has changed. From horse driven carriages to automotive cars. From pencils to computers. But one thing remains the same for more than one hundred years. The conveyor system manufacturers still produce the same powerful piece of technology – conveyor belts and chain conveyors. It doesn’t matter what sort of cargo you want to move in a manufacturing process, you will need a conveyor belt or chain to do that.

Nobody knows exactly when a first conveyor has been built, but at the end of eighteen century there has been a number of conveyor system manufacturers. Nobody actually sold these pieces of material transportation, but many used them in their own industry. Since Fords’s model T, conveyors rapidly spread around the globe and became not just a necessity, but integral part of any business involving moving cargo, goods or any material whatsoever. And along came companies specialized in designing and implementing a conveyor system. Among them Nieros is one that remains in the industry for more than 240 years. 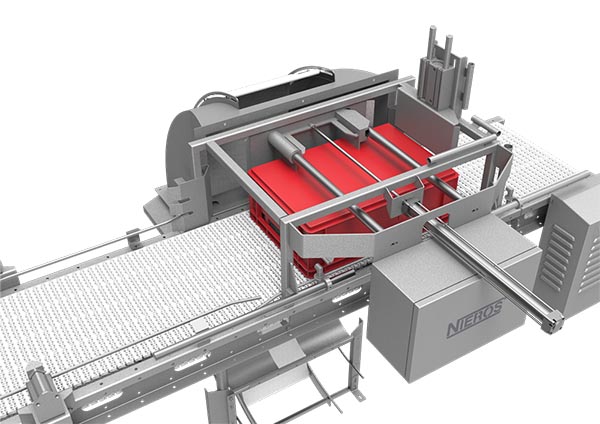 Conveyor system manufacturers offer material handling conveyors that are able to transport materials as crate, box, pallet box and IBC containers from one site to another, either on the same level or by means of vertical conveyors on different levels. This is especially important where other means of transportation would to bulky, slow or expensive. Conveyors are versatile. They can be installed almost anywhere and are much safer than other means of transporting goods from one site to another (like forklifting). They are also faster, much more reliable and come with extremely low operational costs. In Nieros we design, build and implement total intralogistic and material handling solutions. Either be classic transport systems, food processing lines or whole warehouse systems.

Material handling conveyors come in a wide variety of forms. Without being too technical, let’s just say that their basic distinction is by means of propulsion. They can be motor powered or just simple rolls where pallets or boxes can be pushed by manforce along the trail (gravity conveyors). Later types are most useful where human presence is needed. Especially when assembling items on the production line and where the hold-up is expected. Belt conveyors can be either rubber band or roller conveyors. The former are most commonly used as they are the most versatile and least expensive. Since they can be manufactured with curved sections they are more common in postal services and baggage handling systems.

What are a flexible conveyor systems?

Flexible conveyor systems are belts usually made from stainless steel or aluminum that can be moved around in the horizontal plane. These conveyors conform to various shapes necessary in the manufacture process. Such conveyors are usually equipped with wheels and can be stretched virtually all around the horizontal plane. Most of them are gravity conveyors, but they can be also powered. They are usually handy when transporting incoming materials and dispatching them to various fixed belt conveyors. 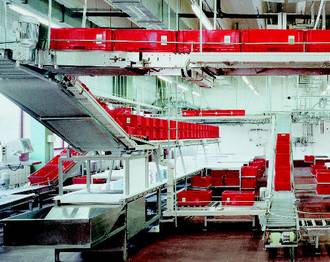 Material handling conveyors can be built to custom size. They come in various forms. From gigantic conveyors like the one between India and Bangladesh that stretches over 35 kilometers or just miniature belts one can use in handling precision equipment or small parts. They can be used for small parts transportation in automated machines with little space. They are mostly used in food and pharmaceutical industry.

One would think that conveyors are boring and that there are no interesting facts about them. But did you know, that the world strongest conveyor belts are used in Chilean copper mines? They can withstand a force of 15 mN, which maybe doesn’t seem much. But imagine this: these belts are so strong, that they could hold about 25.000 people standing on top of each other! The longest single belt conveyor is indeed situated in India, but it is possible to connect different conveyors together. The longest such structure is used to transport phosphate ore in Western Sahara. It is more than 100 km long and it is visible from space. And finally, though generally slow, conveyors can also be extremely fast. The one used in german lignite mining company travels with the amazing speed of almost 60 km per hour.

One of the oldest conveyor system manufacturers in the world is Slovenian company Nieros. The company’s predecessor was manufacture that was established in 1773 by the Count of Thurn. Established first as a blacksmith company by the end of the 19th century became a major scythe manufacturer for Austrian-Hungary empire. Today its full robotized manufacture process focuses on logistic solutions (conveyors and transportation), hygiene equipment and industrial washes.